In February of 2017 a fire occurred at a residence in Desert Hills Arizona. The homeowner was out of state attending a family funeral and had a friend house sitting for him at the time. The homeowner was a licensed primary caregiver for medical marijuana and had a separate facility on his property where the marijuana grow was done. This grow facility building was not involved in the fire. Responding public fire department found that there was evidence of marijuana at the residence and immediately concluded that the fire was the result of an explosion from the manufacturing of the concentrates for medical marijuana. The private sector fire investigators also agreed and advised the insurance company for the homeowner that the fire was the result of the manufacturing of marijuana concentrates. The local law enforcement agency was aware that the homeowner was a licensed caregiver and allowed to grow a certain amount of marijuana on his property. However, the law enforcement officials believed that the homeowner had more marijuana plants at the house than was allowed by the law. Because of this the insurance company denied the claim filed by the homeowner. The homeowner then hired legal counsel who in turn retained the services of Andler & Associates.

Andler & Associates were able to conduct several scene examinations as well as conduct interviews with the insured and his friend who had been house sitting at the time of the fire. Andler & Associates also did a complete review of all the reports from the local law enforcement and the insurance fire investigators.

After a complete review of all available information, it was determined and proven, that the premature conclusions made by the local fire department, law enforcement and the insurance investigators was incorrect. The fire was not the result of an explosion from the manufacturing of medical marijuana concentrates. Furthermore, it was discovered that because the scene and the fire were not properly preserved and investigated initially by those with the responsibility to conduct the investigations, a conclusive finding could not be made now. The local law enforcement, fire department, and insurance investigators had failed to consider many competent ignition sources within the room of origin. Those investigators were instead led in their investigation by a well-known phenomenon called “Bias Expectation”. These investigators found that marijuana was present at the scene and immediately concluded the fire was the result of production of medical marijuana concentrates because law enforcement officials had indicated they believed there may be too much plant production on the property.

These investigators did not perform a complete and thorough investigation into all potential factors and instead used the medical marijuana production as a convenient and incorrect conclusion for the cause of this fire.

After the results of the investigation performed by Andler & Associates were revealed this case ultimately settled and the homeowner was paid for the insurance claim for his house fire. 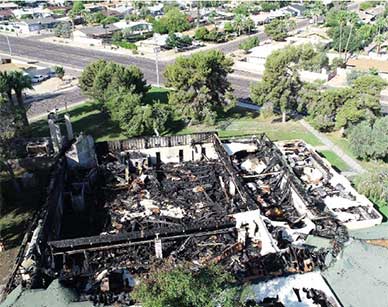 After a complete and thorough investigation was performed, the cause of this fire was determined to be from spontaneous combustion. Earlier in the day there had been some renovative work being performed in the chapel including staining of wood paneling. The materials used to do the staining of the wood had been discarded into a plastic trash receptacle in a maintenance room behind the stage inside the chapel. This set into motion the event known as self-heating or spontaneous combustion. Without the complete and thorough investigation performed by Andler & Associates and the
utilization of many outside resources, the factors surrounding this fire may not have been known due to the near complete destruction of the building. The damages for this loss exceeded ten million dollars. 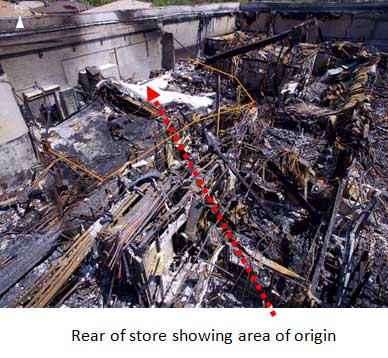 On July 11th, 2018, the Safeway grocery store at 35th Ave and Northern, in Phoenix was destroyed by fire during a summer monsoon storm. The fire occurred at approximately 5:45 PM while the store was open for business and customers were in the store. All employees and customers were able to evacuate the store and there were no injuries reported,

Safeway corporation hired Andler & Associates to investigate this fire that had destroyed the store. Faced with an extremely large scene and seemingly a “needle in a haystack” challenge, Andler & Associates Investigators were at the scene as soon as it was released by Phoenix Fire Department Investigators, and were meeting with Safeway Corporate executives and planning a strategy for this very large investigation.

Through a thorough inspection of the scene, the use of aerial photographs, extensive interviews, and the interpretation of the existing and recognizable fire patterns remaining at the scene, an area of origin was determined.

Andler & Associates were able to determine that the monsoon storm that was happening at the time of the fire had caused an excessive amount of rain to develop on the roof at the rear of the building. The roof weakened over time, and the weight of the massive amount of rain build up, caused the roof to collapse. The roof collapsed in the rear of the store and caused damage to an electrical panel that subsequently created an electrical failure that started this fire.

Andler and Associates performed a technical review and critique of the investigative practices of the Glendale Fire Department Investigative Unit and submitted their findings. The City of Glendale then settled the case for a monetary amount agreeable to Mr. Berenter.

After a two day mediation in which Mr. Andler testified on both days, the mediator made the decision of a defense verdict in favor of the City of Scottsdale.

Donald Rumsfeld, the former secretary of defense under the Bush Administration, sustained a fire loss at his single family dwelling located north of Santa Fe, New Mexico. Mr. Andler was retained to investigate this loss on behalf of Mr. Rumsfeld’s insurance carrier.

It was determined that the cause of the fire was accidental as a result of cellulose insulation that had been placed too close to an energized canister light fixture in the attic.

Internationally acclaimed movie actor, Bruce Willis was the owner of a ski lodge located in Idaho. Mr. Andler was retained on behalf of Mr. Willis’ insurance carrier to conduct an origin and cause investigation. Mr. Andler was able to determine the cause of the fire to have been accidental and, as a result, Mr. Willis was able to rebuild his ski lodge in a short period of time.

Jeofrey Mutuvi-Kavu, age 12 and Benson Mutuvi-Kavu, age 3, had come home from school and found a note from their mother on the kitchen table stating that there was soup available in the refrigerator.

In the attempt to warm the soup up for an afternoon snack after school, a flash fire (explosion) occurred severely burning both boys. The stove was determined to have been defective and as a result was the direct cause of a natural gas flash fire.

Both boys required skin graft procedures and will require additional surgical procedures over the course of their lifetime.

Electrolux denied any defect in the stove whatsoever and elected to go to trial. During the nine day trial, Mr. Andler testified as to the origin and cause investigation and was up against some of the leading fire and explosion experts in the United States.

Prior to closing arguments, the defendants did offer $1,750,000.00 however it was rejected. During the nine day trial, the jury deliberated for four hours over a two day period and awarded the plaintiffs 43.1 million dollars. It is believed to be one of the largest verdicts in Pinal let alone the state of Arizona.

Up against all odds and a string of leading defense experts, the plaintiffs prevailed in this case, believed to be one of the largest landmark personal injury cases in the state of Arizona.

Allstate vs Ferrari of North America

Allstate Insurance Company through the law firm of Cozen O’Connor filed a civil action against Ferrari of North America claiming that the filler neck leading to the Ferrari car was defective in design and , as a result, was a cause to a fire.

Allstate Insurance Company paid over $185,000.00 and was pursuing a subrogation claim against Ferrari of North America.

Under legal counsel, Andler & Associates was retained to represent Ferrari which at that time, Patrick Andler was retained and was able to examine the subject vehicle that is described as a 430 Ferrari. During the two day inspection it was determined that the filler neck was not the cause of the fire whatsoever and was not an accidental fire.

Further examination reveals that holes were drilled into an adjacent fuel line and, as a result, the fire was intentional act of arson.

While conducting a background check into the owner of the Ferrari, it was determined that he had recently been sued by the State of Utah for real estate fraud exceeding thirty million dollars.

During mediation, Mr. Andler testified that it was not an accidental caused fire by the poor design of the filler neck but was an act of arson by intentional act of drilling holes into the fuel line which allowed gasoline vapors to come in contact with the hot surface of the motor and/or electrical components which was the ignition source to the fire.

At the conclusion of the mediation the case did settle for a significant amount less that what the plaintiffs were asking.

Mr. Andler testified during the mediation with the use of a power point presentation and showing the mediator the subject TV set along with an exemplar TV set.

A successful resolution on this case was helpful for the wife and her only child. They now live in Mesa, Arizona.

Two young women were occupying a trailer at a rodeo ground south of Tucson when an explosion occurred injuring both young girls.

Alderson, a former beauty queen and rodeo champion was severely injured in the explosion. Through months of investigation and numerous inspections and being confronted with an army of defense experts, it was determined that the cause of the explosion was a buildup of methane gas from a poorly sealed toilet Upon completion by the team of plaintiff experts and written reports provided to the liability carrier, a six million dollar offer was made and included both policy limits and the case settled. Ms. Alderson currently resides in southern Arizona and is currently married.

In the early morning hours a security guard discovered a fire underneath a 200 yard tent located at the West World in Scottsdale, Arizona. Fire quickly spread throughout the tent and multiply vendors who had been displaying their goods at the time were complete destroyed.

Mr. Andler was retained by the plaintiffs class action lawsuit filed against West World and a company that had installed temporary electrical power.

During the bench trial, Mr. Andler testified that the cause of the fire was not a halogen light that six other fire investigators believed had caused the fire but was a result of an overheated flat extension. The extension cord had been placed underneath carpeting and was a code and manufacturer violation.

Although six other experts testified that Mr. Andler was wrong in his opinion, the judge in this case , being a bench trial, found in favor of the plaintiffs and awarded them a multi-million dollar verdict.

Andler & Associates, Inc. is a leading fire investigation firm based in Phoenix Arizona since 1989.
AVAILABLE NATIONWIDE

Speak with a Fire Investigator